JW Marriott Hotel Pune wore an Arabic look with chandeliers dangling from the roof, the huge curtains adorning the outside seating area and the beautifully lit tables that screamed Arabic charm all through the night. 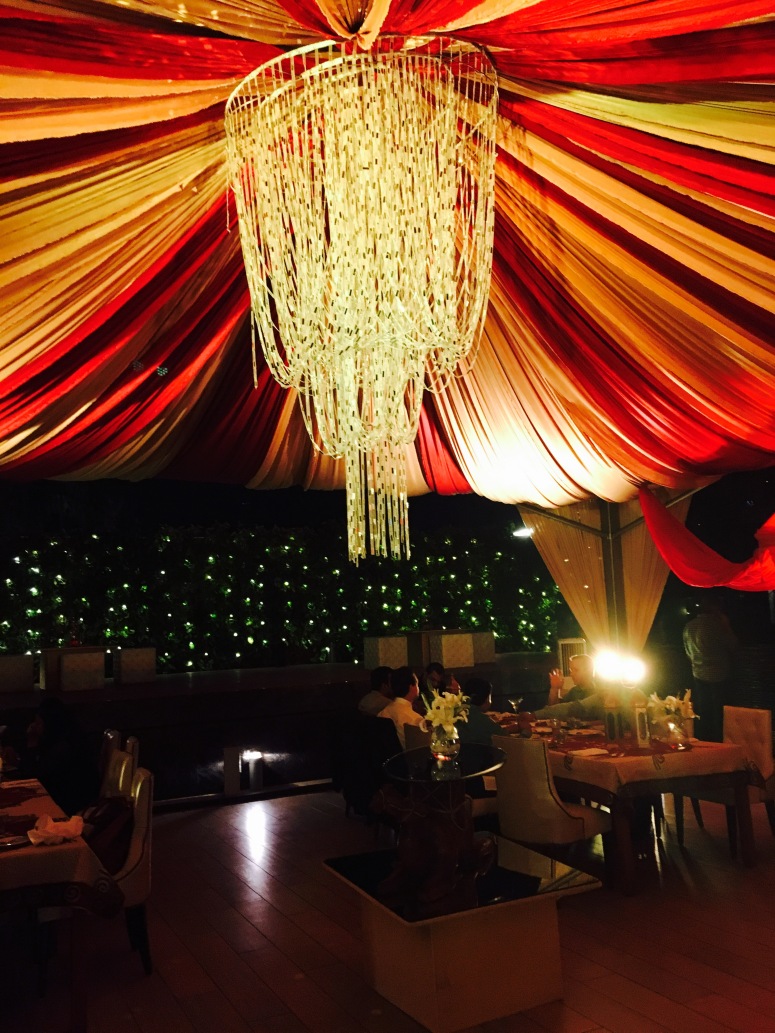 I was invited to indulge in a lip smacking dinner experience at the JW Marriott which is running an Arabic food festival from 19th March to 31st March and boy was i excited.

The minute you step into the al fresco seating area of Spice kitchen you can smell the delicious aromas of enticing Arabic spices wafting through the air. Various mediterranean delicacies like Mezze, Shawarma and kebabs are served as a part of this spread. While there were several kebabs like Ko Fia kebab, Tikka Kebabd, Shish Taouk, Tawa ke nath;  my favorite was Shish Taouk which was fresh, succulent and well marinated in yoghurt. Though a little bland, the freshness of the meat and generous use of marinate made this easy to eat and not chewy.

The next best for me was the Chicken Shawarma. This portion is big enough to be called a meal in itself. Also, this was perfect with the Chicken, the fries and the hummus. It was love in every bite.

There were several dips on the house like the Luba bi Zeit, Moutable, Hummus, Baba Ghanoush but i thought the use of lime was a little in excess in most dips especially the hummus.

We were also served Jelab which was a delightful mix of Grape Juice, Rosewater, Dry fruits. This was definitely something i hadn’t tried before.  It tasted heavenly – thanks to the rosy, nutty flavours that were unique in every way. The drink was served at the perfect temperature and helped cool us off ; considering the mercury had touched 35 deg C that sweltering evening.

The best part about the festival is that it is open to those who wish to enjoy the buffet at Spice kitchen and vice versa. So it turns out to be a great deal with your buffet. Not only can you partake in the regular buffet from Spice Kitchen but also savour the Arabic flavors- the kebabs , shawarmas et al.

Arabic food being one of my favourites, i was more than delighted to have been a part of this Arabic evening.
A big thank you to Sreshta from Goliopinion and Manasi Pinge from JW Marriott who were not only great to talk to but also added the ‘fun’ element to the evening.

Also,it is only worth mentioning that  Chef Mayur Tiwari and Specialty Chef Faouzi Aloui from Dubai,the masterminds behind this festival, are  sure to transport you to the magical land of sands and seas with a feast of gastronomic Arabic delights.

There was an error retrieving images from Instagram. An attempt will be remade in a few minutes.